BlackRock’s separation agreements required departing employees to “waive any right to recovery of incentives for reporting of misconduct.”  This provision would prevent a former employee from claiming an SEC whistleblower award, thereby eliminating what the U.S. Congress called a “critical component” of the SEC whistleblower program.  (See the SEC’s Order, p.2 ¶ 3.)

Congress created the SEC whistleblower program in 2010 as part of the Dodd-Frank Act. 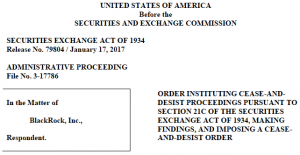 …you waive any right to recovery of, incentives for reporting misconduct, including, without limitation, under the Dodd-Frank Wall Street Reform and Consumer Protection Act.

In its Order imposing sanctions against BlackRock, the SEC did not mince words:  “BlackRock … directly targeted the SEC’s whistleblower program by removing the critically important financial incentives that are intended to encourage persons to communicate directly with the Commission staff about possible securities law violations.”  (BlackRock Order, p.3 ¶ 10.)

According to the Co-Chief of the SEC Enforcement Division’s Asset Management Unit, “Asset managers simply cannot place restrictions on the ability of whistleblowers to accept financial awards for providing valuable information to the SEC.”  (See the SEC’s press release here.)

According to the SEC’s Order, HomeStreet’s severance agreements required departing employees to waive various potential claims as a condition of receiving severance payments and other consideration from HomeStreet.

One version of HomeStreet’s severance agreements also stated that, while the departing employee would not be prohibited from speaking with any government agency, doing so “shall be considered a waiver of any damages or monetary recovery therefrom.”  (HomeStreet Order, p. 9 ¶ 39.) 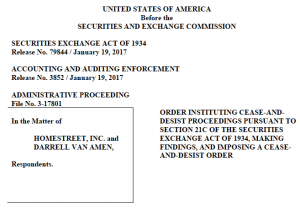 In a press release about the HomeStreet case, the Director of the SEC’s San Francisco Regional Office stated, “Companies that focus on finding a whistleblower rather than determining whether illegal conduct occurred are severely missing the point.”   The Chief of the SEC’s Office of the Whistleblower added, “Companies simply cannot disrupt the lines of communications between the SEC and potential whistleblowers."

The Orders require BlackRock and HomeStreet to do certain things (undertakings), and impose monetary penalties on them, for requiring that departing employees waive their rights to an SEC whistleblower award.  In the case of HomeStreet, the undertakings and penalties were also imposed for the company’s additional actions to impede SEC whistleblowers, and for its  substantive securities violations.

The sanctions against BlackRock and HomeStreet are similar to certain sanctions imposed on prior companies, as discussed in my earlier posts.

BlackRock also seems to have voluntarily taken certain remedial actions on its own, before being contacted by the SEC, which may have reduced the amount of the penalty that BlackRock had to pay.

For example, BlackRock now provides all employees with mandatory yearly trainings that summarize and give the employees a link to a “Global Policy for Reporting Illegal or Unethical Conduct.”  Part of that Policy advises employees of their right to report violations and crimes to the SEC without notifying BlackRock.  It also advises employees of their right not to be retaliated against for reporting possible securities violations.  (BlackRock Order, pp. 3-4 ¶ 12.)

BlackRock also updated its Code of Business Conduct and Ethics, and other documents, “to ensure that employees understand that there is no restriction on their rights” under the SEC whistleblower program.  (BlackRock Order, p.4 ¶ 13.)

This is the first time that I am aware of that a major company has publicly acknowledged that it has implemented a mandatory yearly training program specifically designed to educate employees about their rights under the SEC whistleblower program.

While not binding on other public companies or financial institutions, BlackRock’s mandatory training program could serve as a precedent for other companies seeking to mitigate the sanctions imposed on them by the SEC in future cases.

In addition, while BlackRock neither admitted nor denied any wrongdoing in the Order, its remedial measures could be interpreted as a major player acknowledging that it cannot try to prevent its employees from receiving SEC whistleblower awards.  As a widely-recognized elite asset manager, BlackRock’s actions may grab the attention of other companies in its industry.