Can A Government Employee Win An SEC Whistleblower Award?

However, yesterday the SEC announced that it granted an award of nearly $2.5 million to a domestic government employee. 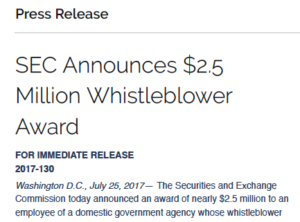 In its Order, the Commission noted that “Generally speaking, an employee of a federal, state, or local government can … be eligible for an award under our whistleblower program” unless the employee is subject to one of two statutory exceptions.

The first exception is for employees of “an appropriate regulatory agency”.  According to the Order, this means the SEC and certain “banking agencies” listed in the statute.

The Order states, “This exception has no potential application to Claimant given the governmental authority at which Claimant worked”.  This language indicates that, in the Commission’s view, an employee of a domestic government agency not listed in the statute is eligible to win an SEC whistleblower reward.

The second exclusion is for employees of “a law enforcement organization”.  Normally, this exclusion would seem to be fairly straightforward.

However, as the Order points out, there may be times where a domestic governmental agency may have both law enforcement powers and other functions that have nothing to do with law enforcement.

According to the Order, an employee of one of these hybrid agencies is eligible to win an SEC whistleblower award, provided that he or she is employed in a unit or division of the agency that does not do law enforcement work. 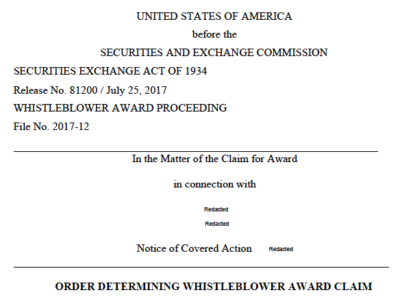 The whistleblower in this case, who won an award, apparently worked in a non-law enforcement unit or division of such a hybrid agency.  The Commission explained:

… it is reasonable to interpret the exclusion flexibly and, in appropriate cases such as this one, to apply it only to employees of a clearly separate agency component that performs law enforcement functions, rather than to all employees of an entire agency that happens to have been granted law enforcement powers among its many other separate responsibilities and powers.

Some Important Caveats To Keep In Mind

The Commission stated that “this is not a situation where a claimant sought to circumvent potential responsibilities that his or her government agency might have to investigate or otherwise take action for the misconduct”.  (Order at pp. 2-3 n.3.)  However, the Commission added that it was not expressing any view as to “how an award determination might differ under that alternative circumstance”.

It should also be noted that the Order pertained only to employees of U.S. domestic authorities.  While foreign citizens and residents are eligible for and have been granted SEC whistleblower rewards, employees of foreign governments or foreign regulatory authorities are excluded from receiving SEC awards.  (17 C.F.R. Pt. 240, §240.21F-8(c)(2).)