In my post last week, I mentioned that as an SEC whistleblower lawyer, prospective clients often ask me whether terms in their companies’ separation or confidentiality agreements preclude them from blowing the whistle to the SEC.

After my last article was posted, later that afternoon the SEC came out with another case against a company that put terms into its separation agreements in order to prevent its employees from reporting to the SEC.  It was the fifth case of this kind that the SEC has brought in the past five months.

In addition to the restrictive agreements, the company retaliated against an employee who blew the whistle internally at the company.  The employee did not blow the whistle to the SEC.  This was the first time that the SEC has brought a case involving a strictly internal whistleblower.

For the combined violations, the SEC fined the company $1.4 million.

Whether you are a prospective SEC whistleblower or an SEC whistleblower lawyer, this case should interest you.  It represents an extension of the SEC’s assertion of its powers over public companies that we have not seen before.  It also shows how far the SEC is willing to flex its muscles to protect whistleblowers.

In its Order imposing sanctions, the SEC found that the company, SandRidge Energy, Inc., used separation agreements that prohibited its former employees from having voluntary, direct communications with the SEC. 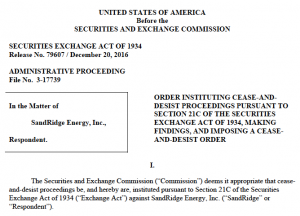 Retaliation against an internal whistleblower

One of SandRidge’s employees raised concerns with senior management about how the company was making certain calculations that were reported in the company’s filings with the SEC.  The employee continued to raise these concerns internally at the company for approximately 2½ years.

The Order is unclear, but it appears that SandRidge either reduced the employee’s responsibilities or contemplated it.  The company also considered firing the employee.  Members of SandRidge’s senior management called the employee “disruptive”.  The Order says that they discussed their belief that they could replace the employee with someone who would not create “all the internal strife.”

In addition, SandRidge searched the employee’s e-mails for terms related to the issues the employee raised.  One of the search terms the company used was “SEC.”

According to the Order, the only thing that SandRidge did to investigate the employee’s internal complaint was to conduct what the SEC called an “incomplete internal audit.”

In the end, SandRidge terminated the employee.

The SEC stakes out its position on internal whistleblowers

In a press release about the SandRidge case, the Chief of the SEC’s Office of the Whistleblower was blunt:  “Whistleblowers who step forward and raise concerns internally to their companies about potential securities law violations should be protected from retaliation regardless of whether they have filed a complaint with the SEC.”

She also pointed out that “This is the first time a company is being charged for retaliating against an internal whistleblower, and the second enforcement action this week against a company for impeding employees from communicating with the SEC.”