New SEC Rules Amendments Raise Concerns For Whistleblower Attorneys: How Justified Are They? 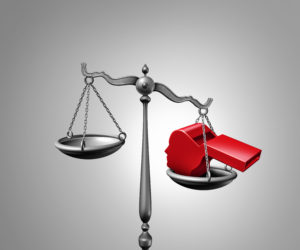 Two recent, momentous announcements by the SEC grabbed the attention of SEC whistleblowers and the whistleblower law firm attorneys who represent them.

On September 28, 2020, the Securities and Exchange Commission (SEC) announced that it granted its 100th whistleblower award.

In a statement about the 100th award, the SEC’s Chairman said:

Today’s award marks a milestone for the whistleblower program. This whistleblower is the 100th individual to receive an award under the program since its inception, and the 33rd individual awarded so far this year.

The pace and the amounts of the awards in recent years underscore the Commission’s commitment to increasing the efficiency and effectiveness of the whistleblower program. We remain dedicated to working quickly to get more money into the hands of whistleblowers...

In an SEC press release about the record $114 million award, the Chairman stated:

Today's milestone award is a testament to the Commission's commitment to award whistleblowers who provide the agency with high-quality information... Whistleblowers make important contributions to the enforcement of securities laws and we are committed to getting more money to whistleblowers as quickly and efficiently as possible.

However, these two milestones have not been without controversy, with some whistleblower law firm attorneys questioning their timing. 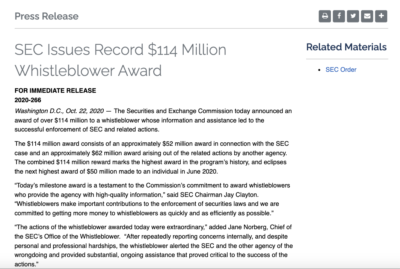 The SEC’s press release about the $114MM award

Some whistleblower lawyers pointed out that the Commission announced the 100th award just five days after it voted to pass its controversial amendments to the SEC whistleblower rules.

Other whistleblower law firm lawyers noted that the Commission announced the $114 million award on October 22, 2020. In other words, just one day before the earliest possible effective date for the new amended rules. (The amendments actually became effective on December 7, 2020.)

The concerns regarding the new amendments stretch back to when the Commission first proposed the amendments on June 28, 2018. Analyzing all of them exceeds the scope of this article, but the media widely covered one in particular.

That concern pertained to a proposal that many classified as a "cap" on SEC whistleblower rewards. Under that proposal, for cases in which the SEC collected more than $100 million, it could reduce a whistleblower’s award. The Commission could reduce the award to an amount that it deemed "reasonably necessary". However, the reduced award still had to fall within the 10%-30% range required by the Dodd-Frank Act.

Whistleblowers and whistleblower law firm attorneys, and others, roundly criticized this proposal to "cap" SEC Whistleblower awards. So, too, did U.S. Senators from both the Republican and Democratic parties.

The final amendments to the SEC whistleblower rules dropped the "cap" rule.

Previously, SEC award orders predominantly quantified awards granted in terms of percentages of the overall amount collected in the case. However, in connection with the amendments, the Commission asserted its authority to issue awards denominated in dollar figures. The Commission called this a procedural clarification. Some lawyers wondered, though, whether it really represented a backdoor attempt to reintroduce a discretionary cap on awards.

At the risk of oversimplifying, the fear that those whistleblower law firm attorneys have is that the SEC could determine that a spectacular whistleblower meets the criteria for a maximum 30% award, but could then issue an award in a lower dollar amount without ever mentioning what percentage the whistleblower was originally found to be entitled to.

Given the original "cap" proposal, these fears do not lack basis. However, it has long been advisable for an SEC whistleblower attorney, or any attorney for that matter, to maintain their objectivity in order to provide the best advice they can to their clients. This involves refraining from becoming so emotionally involved in a particular matter or cause that the lawyer's advice becomes impaired.

Keeping that in mind, it is worthwhile to examine this issue from the opposite perspective.

Therefore, if the SEC wants to deceptively "cap" large awards, it could already do that by manipulating the percentages. The Commission would not need to announce a new procedure about issuing awards in dollar amounts to do so.

The Timing Of The 100th SEC Whistleblower Award

Some whistleblower law firm attorneys posited that the announcement of the 100th SEC whistleblower award less than a week after approving the amended rules may have been an attempt to divert attention away from that vote. For several years, whistleblower law firm lawyers have been complaining about how long it takes for the Commission to grant awards. The Commission itself has acknowledged the lengthy delays and stated (or implied) its intention to try to find ways to speed up the award process.

The timing of the 100th award may have been fortuitous, but to criticize the SEC for issuing it (as opposed to sitting on it and not granting it, and backing up the other awards waiting in line to be issued behind it, for months longer) seems a bit inconsistent. In fact, in a little more than a month following that 100th award, the Commission granted ten more awards (as of November 3, 2020).

The Timing Of The $114MM SEC Whistleblower Award

Likewise, some SEC whistleblower attorneys questioned whether the SEC issued the record $114 million award the day before the new amended rules could have first gone into effect for public relations reasons. They reason that the Commission intended the announcement to deflect attention away from those new rules.

However, if the Commission intentionally timed this announcement, it may have done so to send a different message. The Commission recognizes the fear and controversy surrounding its abandoned "cap" rule. The announcement of this record award may have been the Commission's way of trying to reassure everyone that it does not intend to artificially or unfairly cap large awards.

So who has the correct view? Well, if you have faith in how the current SEC leadership is implementing its whistleblower program, you may be justified. The SEC did recently announce the record $114 million award. Moreover, during the 2020 fiscal year, the SEC gave out more individual whistleblower awards than in any prior year.

If you are skeptical or concerned, you, too, may be justified based on the recent rules amendments. In addition, the SEC did propose the "cap" rule, only dropping it after a vigorous and sustained public outcry.

Bear in mind, though, that when Presidential administrations change, the new President nominates a new SEC Chairman. Each of the SEC Commissioners serve defined terms of office. They then either resign or have to be reapproved for another term. Different SEC Chairmen, and different Commissioners, hold different views.

So if you feel concerned, remember that one Commission might do things one way. But that does not mean that a future Commission will do things the same way.

Some people like the recent changes; others remain skeptical. Either way, only time will tell how the Commission will implement them in practice. The amended rules and their related pronouncements are too new for there to be reliable data yet about how the Commission may go about applying them going forward.

For a more detailed memo about the 2020 SEC whistleblower amendments, please click here.

SHARE ON
TwitterFacebookLinkedInPin It
<< Defending An SEC Investigation: Jason Pickholz video rated 5 out of 5 stars: "One of the best programs, on any legal topic, I have ever seen."
New SEC Whistleblower Rules Amendments, Part 2 >>