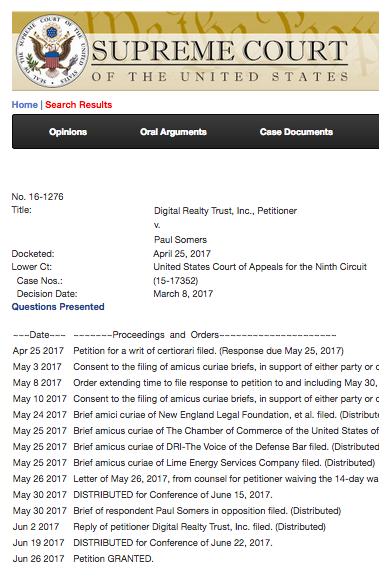 Do the Dodd-Frank Act’s anti-retaliation provisions protect whistleblowers who report securities frauds or violations to their employers, if they do not also report them to the SEC?  This question is of particular concern to an SEC whistleblower lawyer, who may be faced with a client who has been retaliated against or fired by his or her employer for blowing the whistle internally to the company.

Since at least 2013, this may be the most often-litigated question arising under the SEC whistleblower program.  It is a question that has split and divided many U.S. District Courts and U.S. Courts of Appeals.

The actual title of the statute that codifies the SEC whistleblower program is “Securities Whistleblower Incentives and Protection”.  (15 U.S.C. § 78u-6.)

One subsection of the SEC whistleblower statute provides that:

No employer may discharge, demote, suspend, threaten, harass, directly or indirectly, or in any other manner discriminate against, a whistleblower in the terms and conditions of employment because of any lawful act done by the whistleblower --

An employee who believes that he or she was retaliated against in violation of the above provisions has the right to bring a private lawsuit in an appropriate U.S. District Court.  (15 U.S.C. § 78u-6(h)(1)(B).)

The relief available in the private lawsuit “shall include”:

The Split Among The Courts

The reason why federal courts have disagreed over the answer to this question has to do with the language in the statute itself.

In addition to the sections cited above, some of the provisions in the Dodd-Frank Act and the SEC whistleblower statute specifically mention reporting to the SEC.  Other sections do not.

Some courts have interpreted the various sections of the statute to mean literally what they say.  Other courts have said that the wording, or the differences in wording from section to section, create ambiguities with regard to what the U.S. Congress really intended.

The SEC has written amicus briefs in several court cases brought by employees -- what are sometimes called “friend of the court” briefs.  In those briefs, the SEC has taken the position that the SEC whistleblower protections do apply to employees who only blow the whistle internally to their employers.  (See, e.g., the Brief of the Securities and Exchange Commission Amicus Curiae in Liu Meng Lin v. Siemens AG, 13-4385, Dkt. No. 50 (2d Cir.), filed on Feb. 20, 2014.)

Some courts that have found the statute to be ambiguous have deferred to the SEC’s interpretation, under what is known as the Chevron doctrine.  Other courts have refused to adopt the SEC’s position, and have instead made their own interpretations.

The case from the Ninth Circuit was Somers v. Digital Realty Trust, Inc.  In that case, the Ninth Circuit agreed with the Second Circuit that the SEC whistleblower protections apply even if the employee only reported internally to his or her employer.

The Ninth Circuit specifically disagreed with and refused to follow the Fifth Circuit.

Whether the anti-retaliation provision for “whistle-blowers” in the Dodd-Frank Wall Street Reform and Consumer Protection Act of 2010 extends to individuals who have not reported alleged misconduct to the Securities and Exchange Commission and thus fall outside the Act’s definition of a “whistleblower.”

The Supreme Court will hear arguments in the case sometime during the Court Term that begins in October 2017.

Needless to say, this is a case that will be watched closely by employees, SEC whistleblower attorneys, and employers alike.

SHARE ON
TwitterFacebookLinkedInPin It
<< SEC Fines Barclays Again: $97MM Is The Second Fine In Under 2 Weeks
Can A Government Employee Win An SEC Whistleblower Award? >>