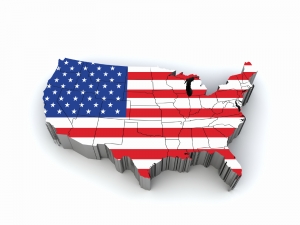 Throughout 2019, the whistleblowing policy of the U.S. Legislative Branch was consistently in support of SEC whistleblowers.  During the year, both the U.S. Senate and the U.S. House of Representatives introduced bipartisan bills to expand CFTC and SEC whistleblower program protections.

The Senate also passed a resolution designating a National Whistleblower Appreciation Day, to increase public awareness of whistleblowers and the critical role they play in helping the government to identify and combat fraud and corruption.

On the Executive side, the Inspectors General of approximately 68 federal government agencies publicly proclaimed their support for maintaining strong whistleblower protections.  In doing so, they reinforced their ongoing whistleblowing policy of encouraging, supporting, and protecting their whistleblowers.  These included the Inspectors General of the U.S. Securities and Exchange Commission (“SEC”) and the Commodity Futures Trade Commission (“CFTC”).

Back on May 8 of this year, Resolution 194 was submitted to the U.S. Senate (S. Res. 194).  That Resolution proposed designating July 30, 2019 as “National Whistleblower Appreciation Day”. 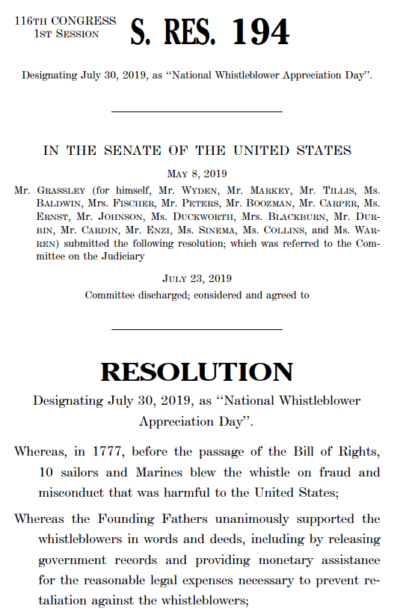 The text of the Resolution begins by explaining that as far back as 1777, “the Founding Fathers unanimously supported the whistleblowers in words and deeds”.

it is the public policy of the United States to encourage … honest and good faith reporting of misconduct, fraud, misdemeanors, and other crimes to the appropriate authority at the earliest time possible.

In addition to creating National Whistleblower Appreciation Day, the Resolution encourages each U.S. executive agency to inform its employees, contractors, and members of the public “about the legal right of a United States citizen to ‘blow the whistle’ to the appropriate authority by honest and good faith reporting of misconduct, fraud, misdemeanors, or other crimes”.

While the National Whistleblower Appreciation Day Resolution was under consideration in the Senate, the U.S. House of Representatives passed a bill expanding SEC whistleblower protections.  The title of the House bill is the “Whistleblower Protection Reform Act of 2019” (H.R. 2515).

The House bill is a direct response to the U.S. Supreme Court’s ruling in the Digital Realty case.  In that case, the Supreme Court held that the Dodd-Frank Act’s anti-retaliation provisions do not protect people who blow the whistle internally to their employers without also submitting their information to the SEC.  [For my post about the Digital Realty case, click here.  To listen to my interview on Bloomberg Radio about the case, click here.] 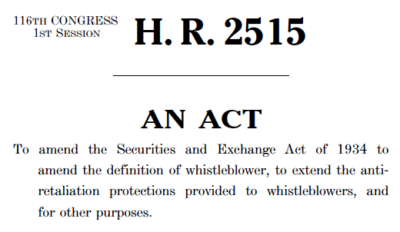 The bipartisan bill was submitted to a vote in the House on July 9, 2019.  The legislative history of the bill explains that it was designed “to ensure that all whistleblowers reporting suspected securities law violations are protected from retaliation by their employers”.

On the floor of the House, the Supreme Court’s ruling in the Digital Realty case was addressed repeatedly.  Representative Waters summed up the sentiment among her colleagues best:  “This [the Digital Realty ruling] is not what Congress intended”.

Representative Barr added that “whistleblowers play a very important role in rooting out bad behavior that harms the market as well as mom-and-pop investors”.  He further explained:  “By clarifying that Dodd-Frank’s antiretaliation protections also apply to internal whistleblowers, this bill addresses the Supreme Court’s interpretation and aligns Dodd-Frank’s whistleblower protections with other major whistleblower laws”.

According to Representative Huizenga, “A whistleblower who reports directly to their employee [sic] about alleged misconduct shouldn’t risk being retaliated against”.

These are people who are willing to put their livelihoods on the line.

These are people who are willing to take that extra step that many of us would not take because, when you take that step as a whistleblower, you will sometimes stand alone.  But they understand that it is better to stand alone than never to stand at all, and in so doing, they are protecting us:  consumers, members of the public.

So I commend the whistleblowers of the world who take these extraordinary steps.

But we also want to do more than commend them.  We want to protect them.  This legislation will protect those who are willing to step forward, those who see something and say something, something that we encourage people to do.

After receiving H.R. 2515 from the House, on September 23, 2019 a bipartisan group of Senators introduced their own bill to the U.S. Senate (S.2529).  The Senate bill is called the “Whistleblower Programs Improvement Act” (“WPIA”).

Like the House bill, the Senate bill responds to the U.S. Supreme Court’s ruling in the Digital Realty case by extending Dodd-Frank’s anti-retaliation protections to employees who blow the whistle internally to their employers, even if they do not also submit their information to the SEC. 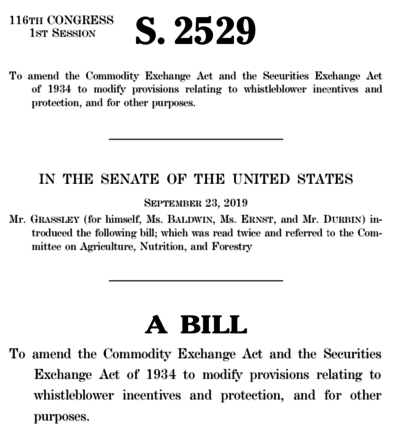 However, the Senate bill goes further than the House bill by adding provisions requiring the prompt determination of SEC whistleblower award claims (S.2529, Section 3(b)(3)). The amount of time that it takes for the SEC to issue meritorious whistleblower awards has been a subject of discussion for some time.  It even prompted part of a letter that U.S. Senator Grassley sent to the SEC Chairman in September 2018 (Grassley Letter, pp. 6-7).  At the time, Senator Grassley was the Chairman of the U.S. Senate’s Committee On The Judiciary.  Presently he serves as the Chairman of the Senate Finance Committee.

If passed in its current form, the WPIA would require the SEC to make an initial determination of an SEC whistleblower reward claim within one year following the deadline for the submission of award claims in that action.

Under certain circumstances, the WPIA would allow the SEC to extend the date to determine the award.  The SEC would be allowed to extend the deadline twice, each time for an additional 180 days.  So, under the WPIA, the total time from the deadline to submit award claims, to the initial award determination, would be no more than two years.

Moreover, under the WPIA, the SEC would be required to provide the whistleblower award claimant with a written notification if it extends its one-year deadline to determine the award claim.

In a press release on his official website, Senator Grassley stated, “Our bill will ensure that those who do the right thing and report violations will be protected”.

Senator Baldwin added, “This bipartisan legislation seeks to extend critical protections for those who want to blow the whistle on crime, fraud, and abuse so we can hold bad actors accountable and protect those who are doing the right thing”.

There has long been a bipartisan consensus that if whistleblowers are being retaliated against for reporting wrongdoing, Congress has a responsibility to step in.  Whistleblowers deserve to be protected.  Period. 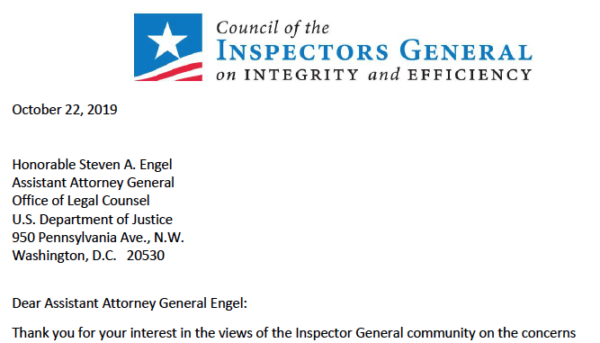 In or about October 2019, certain individuals began calling for the Ukraine whistleblower’s identity to be revealed.  This prompted a large reaction from politicians, lawyers, the media, organizations, and others to protect the whistleblower’s confidentiality.

In response to the Ukraine whistleblower situation, on October 22, 2019, approximately 68 Inspectors General sent a joint letter to the Assistant Attorney General in the U.S. Department of Justice’s Office of Legal Counsel, expressing their collective agreement on whistleblowing policy.

The Inspectors General declared in their letter that “Whistleblowers play an essential public service in coming forward with such information, and they should never suffer reprisal or even the threat of reprisal for doing so”.  They further stated:

We agree with Senator Charles Grassley, Chairman and co-founder of the U.S. Senate’s Whistleblower Caucus, who noted recently regarding this matter, that whistleblowers “ought to be heard out and protected” and “we should always work to respect whistleblowers’ requests for confidentiality.”

SHARE ON
TwitterFacebookLinkedInPin It
<< SEC Whistleblower Award Winners Have These Things In Common
US Senate & House Take Up SEC Disgorgement After Kokesh: 2019 Year-In-Review Part 2 >>