The Future Of The SEC Whistleblower Program: Post-Election Concerns, Part 1

The following is from part of a 3-part blog about the SEC Whistleblower Program created by the Dodd-Frank Act.  It was originally posted on The Pickholz Law Offices' website during the week of November 14, 2016.  To see the blog as originally published, please click here.

For this reason, I have decided to write a slightly different type of post this week to present some of my thoughts on this question.  Today’s post will consist of my own personal thoughts and opinions, based on over 22 years of experience as a lawyer interacting with the Securities and Exchange Commission; I spent my first 16 years primarily as a white collar and SEC defense lawyer, and the last 6 years almost exclusively as an SEC whistleblower lawyer.  These are my own personal opinions — not facts, promises, or guarantees.  Opinions set forth herein are not legal advice, and should never be considered as a substitute for consulting with your own SEC whistleblower lawyer.

Before I get into the current election, it is important to keep in mind that what we are talking about is a change in administration.  We have elected new Presidents before, and we will elect many more in the future.  Each time a new President has taken office, he has brought with him his own ideas about law enforcement priorities.  Some past Presidents have placed a higher priority on certain categories of securities frauds and crimes; others have emphasized other types.  Some administrations have increased the SEC’s budget; others have reduced it.  What they have all had in common, though, is that since the SEC was created over 80 years ago, no President has ever shut the agency down or refused to enforce the securities laws. 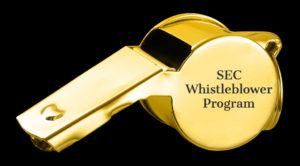 The Dodd-Frank Act was enacted in 2010.  The SEC whistleblower program was created as part of the Dodd-Frank Act.  Since the Dodd-Frank Act came into being six years ago, certain of its provisions have been under attack.  This is nothing new, and calls to “get rid of Dodd-Frank” did not suddenly pop up out of the blue in the recent Presidential election.

That phrase — “get rid of Dodd-Frank” — understandably scares SEC whistleblowers and SEC whistleblower lawyers.  However, if you go and look at what the critics in the U.S. Congress are actually complaining about, they tend to focus on sections of the Dodd-Frank Act other than the SEC whistleblower provisions.  Typically the provisions they object to are ones that place capital (financial) burdens on companies, or impose additional and, according to the critics, costly reporting or administrative burdens on companies.  While big companies and some lobbyists focus on the supposed costs and burdens to “big” businesses, i.e., “Wall Street” or “Corporate America”, many politicians and others are equally or more concerned about the burdens those regulations place on regional or local businesses and banks that are still struggling to recover from the Great Recession, i.e., “Main Street”.

Recently, some politicians have criticized the SEC’s increasing use of its own in-house administrative courts, a trend that has been increasing over the last couple of years, rather than bringing its cases in federal court.  But the SEC has had and used its administrative courts for a long time, since well before the passage of the Dodd-Frank Act.  The in-house courts issue is about curtailing an internal practice that is becoming more prevalent, not about a particular provision of the Dodd-Frank Act.

After the Dodd-Frank Act was passed, the SEC was charged with creating rules to implement the whistleblower program provisions.  While the SEC was trying to decide what the rules should be, “Wall Street” and “Corporate America” lobbied the SEC aggressively in an attempt to take the teeth out of the program.  One of their big arguments was that the SEC whistleblower program would convince their employees to not report problems internally, and would instead motivate employees to run first to the SEC in the hopes of getting a financial award.  In response, the SEC passed a rule that said that if an employee reports first to an employer and then to the SEC, that would be a factor that could increase the whistleblower’s eventual SEC award.  But the SEC specifically said that if an employee does not report to his or her employer, first or ever, that will not count against the whistleblower come award time.

Even if the “report internally first” argument were to surface again, it would not seem to be a cause of much concern for the majority of SEC whistleblowers.  According to the SEC, despite the fact that the Rules do not require SEC whistleblowers to report internally to their employers to be eligible to receive an award, “Of the award recipients who were current or former employees, approximately 80% raised their concerns internally to their supervisors or compliance personnel, or understood that their supervisor or relevant compliance personnel knew of the violations, before reporting their information of wrongdoing to the Commission.”  (SEC 2015 Annual Report to Congress on the Dodd-Frank Whistleblower Program, pp. 16-17.)

The phrase “get rid of Dodd-Frank” is a political rallying cry or buzz phrase.  It is also easier, and more sensational, to publish a short attention-grabbing headline of “repeal Dodd-Frank” than it is to write out the specific provisions that are under attack and why, if they would even fit in the space allotted for a title or tag line.  What “get rid of Dodd-Frank” seems to mean is that some politicians want to either change or get rid of certain provisions of the Act.

Like administrative changes when a new President is elected, we have seen many laws that have undergone change.  Again, this is nothing new, and the recent election is not the first time that the idea of changing certain laws has arisen.  Just about every Presidential candidate (maybe every candidate) has campaigned on a platform to change certain laws that he/she or his/her party does not like.

If changes are made to the Dodd-Frank Act, those changes can take several different forms.  They can be amendments that add new provisions to the existing law.  They can be changes or modifications to certain provisions, without scrapping those provisions in their entirety.  They can involve repeals of specific provisions, lifting those provisions out of the law, while leaving the remainder of the law intact.  A repeal of the entire Act is possible, but only likely where there is overwhelming or unanimous consensus that the Act has failed to achieve or no longer serves its intended purpose.  Even then, a total repeal of the Dodd-Frank Act, without the passage of a new Act to replace it, could be political suicide in the current social and economic climate.

It has been reported that both political parties, Republican and Democrat, agree that certain business practices need to be reigned in, and that financial frauds are a serious issue facing the country.  The disagreement seems to be over how best to address these issues, not over whether they need to be addressed.

The SEC whistleblower program is a completely separate, stand-alone provision, with a completely separate purpose from the financial and reporting provisions, or questions of internal SEC procedures.  No U.S. Senator or Congressman who I am aware of has made a credible call for the repeal of the SEC whistleblower award program, at least none that have gained any widespread political or media support.