For decades, it has been accepted that the SEC remedy of disgorgement is available in any civil enforcement action brought by the U.S. Securities and Exchange Commission (“SEC” or “Commission”) for a violation of the federal securities laws. 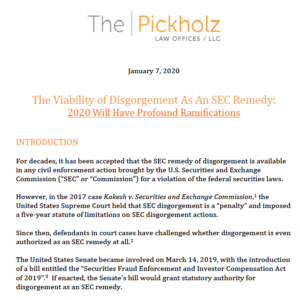 Click the image above for a standalone version of this memo.

However, in the 2017 case Kokesh v. Securities and Exchange Commission,[1] the United States Supreme Court held that SEC disgorgement is a “penalty” and imposed a five-year statute of limitations on SEC disgorgement actions.

Since then, defendants in court cases have challenged whether disgorgement is even authorized as an SEC remedy at all.[2]

The United States Senate became involved on March 14, 2019, with the introduction of a bill entitled the “Securities Fraud Enforcement and Investor Compensation Act of 2019”.[3]  If enacted, the Senate’s bill would grant statutory authority for disgorgement as an SEC remedy.

The United States House of Representatives entered the debate by introducing its own bill on September 17, 2019.[4] Like the Senate bill, the House bill seeks to statutorily authorize disgorgement as an SEC remedy.

In this environment, and apparently wishing to make its thoughts known on the issue, on November 1, 2019, the U.S. Supreme Court granted the petitioners’ motion for certiorari in Liu v. SEC. [5] In the Liu case, the petitioners are challenging the authority of the SEC to seek disgorgement.  Oral arguments in Liu are scheduled to be heard by the Supreme Court on March 3, 2020.[6]

Much has already been written about the Supreme Court’s Kokesh opinion since its issuance and need not be repeated here.  Broadly speaking, in large part the Supreme Court derived its ruling that the SEC remedy of disgorgement is subject to a five year statute of limitations from 28 U.S.C. § 2462.[7]  That statute says that in any “action, suit or proceeding for the enforcement of any civil fine, penalty, or forfeiture”, the statue of limitations is five (5) years.[8]

According to the Supreme Court, when the SEC seeks disgorgement in a civil enforcement action, the disgorgement operates as a “penalty”.[9]  Therefore, the Court said, because SEC disgorgement is a penalty, it falls under the five year statute of limitations provided for by 28 U.S.C. § 2462.[10]

Since the date of that ruling, the SEC has been required to bring its disgorgement actions within five years from the date on which its causes of action accrued.

THE IMPACT OF KOKESH ON THE SEC

Due to the Kokesh decision, the SEC has had to investigate and file its cases in court faster than it did before.  Furthermore, the imposition of a five-year statute of limitations on SEC disgorgement cases has resulted in the SEC foregoing either entire cases or potential causes of action within those cases.  In just the two and one half years since Kokesh, the SEC has already had to forego over one billion dollars in potential disgorgement.

The Chairman of the SEC confirmed this figure during his testimony before the U.S. Senate Committee on Banking, Housing, and Urban Affairs on December 10, 2019:

The Supreme Court’s decision in Kokesh v. SEC, however, has impacted our ability to return funds fraudulently taken from Main Street investors…. Said simply, the Kokesh decision has had the anomalous effect of allowing the most “successful” perpetrators of fraud -- those whose frauds are well-concealed and stretch beyond the five-year limitations period -- to keep their ill-gotten gains.  Since Kokesh was decided, an estimated $1.1 billion in ill-gotten gains has been unavailable for possible distribution to harmed investors, much of which is tied to losses by investors.  More recently, the SEC’s ability to seek disgorgement in any district court action has been questioned.[11]

Both the U.S. Senate and the U.S. House of Representatives have taken up bills addressing both the Kokesh ruling and the Liu case presently pending before the Supreme Court.

THE U.S. SENATE’S BILL FORMALIZING THE SEC REMEDY OF DISGORGEMENT

The Senate’s “Securities Fraud Enforcement and Investor Compensation Act of 2019” (S. 799), a bipartisan bill introduced by U.S Senators Warner and Kennedy, would amend the federal securities laws by specifically authorizing the SEC to “seek disgorgement and restitution as a result of a violation of the securities laws, to establish the statue of limitations … and for other purposes”.[12]

If passed, S. 799 would validate the SEC remedy of disgorgement “in any action or proceeding brought by the Commission under any provision of the securities laws”.[13]

Moreover, the bill would also grant the SEC the ability to also pursue restitution through legal proceedings,[14] with the caveat that the amount of any disgorgement ordered by a court would be offset by the amount of the restitution also ordered in that case.[15] The statue of limitations for SEC restitution claims would be ten years.[16]

However, the Senate’s bill would not represent a complete victory for the SEC.  Under S. 799, SEC disgorgement would continue to be subject to a similar five-year statute of limitations[17] as set forth by the Supreme Court in Kokesh.

THE US HOUSE OF REPRESENTATIVES’ BILL ON SEC DISGORGEMENT

Approximately six months later, in September 2019 the U.S. House of Representatives introduced its own “Investor Protection and Capital Markets Fairness Act”.[18]  As with the Senate bill, H.R. 4344 is a bipartisan bill, co-sponsored by Representatives McAdams and Huizenga, which would provide statutory authority for the SEC to seek and obtain disgorgement in federal court proceedings.[19]

The bill also states that the SEC remedy of disgorgement is not to be construed as a penalty, civil fine, or forfeiture.[20] However, unlike the Senate bill, H.R. 4344 would not retain a five-year statute of limitations on SEC disgorgement actions, but rather would extend the limitations period to fourteen (14) years after the alleged violation.[21]

The legislative history of H.R. 4344 explains that overriding the Kokesh case is a primary motivation behind the House bill:

In 2017, the Supreme Court, in Kokesh v. SEC, held that the authority of the Securities and Exchange Commission, SEC, to recover for investors the wrongful gains of securities law violators, known as disgorgement, is effectively a penalty.  As a result, the SEC’s authority to obtain disgorgement is time limited by the Federal statue of limitations for penalties so that the SEC must bring its case within 5 years of the violation.

This ruling was a boon to white-collar criminals like Bernie Madoff and Allen Stanford, who are now able to defraud investors for a decade and keep their profits.

Even worse, the SEC is currently in litigation before the Supreme Court over whether it even has the authority to obtain disgorgement for investors.[22]

The legislative history also reveals that the bill was partially intended to proactively address the Liu case that is presently pending before the Supreme Court:

… this legislation seeks to fix the Kokesh decision and would address the recent case the Supreme Court agreed to hear about whether the SEC has disgorgement authority at all.[23]

2020 WILL HAVE PROFOUND RAMIFICATIONS FOR FEDERAL SECURITIES LAW ENFORCEMENT

What the Supreme Court and Congress do in 2020 will have profound long-term ramifications for everyone involved with federal securities enforcement cases, regardless of what side of the table they sit on.

How and when the Supreme Court rules in the Liu case, as well as whether Congress enacts legislation addressing the SEC remedy of disgorgement, when it passes that legislation, and what the final SEC remedy provisions look like, will have far-reaching consequences for the SEC, SEC defendants, SEC whistleblowers, securities attorneys, and SEC whistleblower lawyers alike.  For what some of those ramifications might be, see The Pickholz Law Offices’ related blog post here.

ABOUT THE PICKHOLZ LAW OFFICES LLC

The Pickholz Law Offices has represented employees, officers, and others in SEC whistleblower cases involving financial institutions and public companies listed in the Fortune Top 10, Top 20, Top 50, Top 100, Top 500, and the Forbes Global 2000.  We were the first law firm ever to win an SEC whistleblower award for a client on appeal to the full Commission in Washington, an achievement that Inside Counsel magazine named one of the five key events of the SEC whistleblower program.  Examples of the Firm's SEC whistleblower cases are available here.

In addition to representing SEC whistleblowers, since 1995 the Firm’s founder, Jason R. Pickholz, has also represented many clients in securities enforcement investigations conducted by the SEC, FINRA, the U.S. Department of Justice and US Attorney’s Offices, State authorities, and more.  Examples of some of the many securities enforcement cases that Mr. Pickholz has been involved with are available here.

You can see what actual clients have had to say about The Pickholz Law Offices by going to our Client Reviews page.

[11] SEC Chairman Jay Clayton, “Testimony on ‘Oversight of the Securities and Exchange Commission’ Before the U.S. Senate Committee on Banking, Housing, and Urban Affairs (Dec. 10, 2019) (underline added).  A copy of the SEC Chairman’s opening testimony can be found at https://www.sec.gov/news/testimony/testimony-clayton-2019-12-10.