As an SEC whistleblower lawyer, prospective clients often ask me whether terms in their companies’ severance agreements or confidentiality agreements prevent them from reporting frauds to the Securities and Exchange Commission.  According to the SEC, the answer is “no”.

The SEC has been vigorously pursuing companies that put clauses in agreements designed to chill employees from blowing the whistle.  Just yesterday, the SEC brought its fourth case in five months against a company for trying to do this.

Cases Discussed In My Prior SEC Whistleblower Lawyer Posts

The SEC said that the severance agreement violated SEC Rule 21F-17(a).  Among other things, the SEC forced the company to pay more than $6 million in disgorgement, penalties, and interest for both its severance agreements and the substantive violations it committed.

In August, the SEC punished two companies for putting terms in their separation agreements to chill their former employees from reporting to the SEC.  Those companies were Health Net and BlueLinx.

Last year, the SEC punished KBR for imposing confidentiality agreements on its employees that prevented them from telling the SEC about the substance of internal interviews.  The SEC fined KBR $130,000, among other things.

NeuStar: The SEC Isn’t Fooled By A Twist

The clause said that employees could not have any communication that “disparages, denigrates, maligns or impugns NeuStar or its officers, directors” and a whole host of other people.  It then had a big list of people and entities who the employee could not have such communications with.  That list referred to regulators “including but not limited to the Securities and Exchange Commission”.

If the employee breached that clause, he or she would forfeit all but $100 of any severance compensation that he/she had been paid. 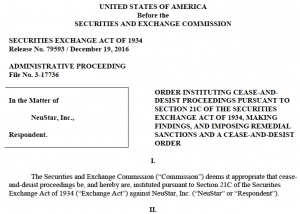 Comments by SEC Officials on NeuStar

The press release quotes the Associate Director of the SEC’s Enforcement Division as stating: “Public companies cannot use severance agreements to impede whistleblowers from communicating with the SEC about a possible securities law violation”.

Also in the press release, the Chief of the SEC’s Office of the Whistleblower expressed “our ongoing commitment to ensuring that potential whistleblowers can freely communicate with the SEC about possible securities law violations.”