Recently, two Committee Chairmen in the U.S. Senate sent a letter to the Acting Chairman of the Commodity Futures Trading Commission urging the CFTC to take stronger actions to protect whistleblowers.  That letter, signed by two ranking Republicans, may come as some relief for a potential CFTC or SEC whistleblower, or for a CFTC or SEC whistleblower lawyer, concerned over all of the recent calls to repeal the Dodd-Frank Act.

Calls To Repeal The Dodd-Frank Act

President Trump campaigned on a platform of “repeal Dodd-Frank”.  Since President Trump’s swearing in last month, he has made several statements about repealing Dodd-Frank, as have many Republican Senators and Congressmen.  Some rules enacted under Dodd-Frank have already come under attack.  News articles about the likelihood and effects of a repeal of the Dodd-Frank Act have appeared in the media almost daily.

Late last week, U.S. House of Representatives Financial Services Committee Chair Jeb Hensarling (R-Texas) supposedly circulated a memo that has been reported in the media as “taking aim” at the SEC whistleblower program.  While I have not yet seen the memo, my understanding is that it was focused on banning co-conspirators in a crime from receiving an SEC whistleblower award.

Under the SEC  whistleblower rules already, if someone is convicted in a criminal case for the conduct they are reporting, they cannot receive an SEC whistleblower reward.  Presumably, the memo seeks to extend that to people who are found civilly liable as co-conspirators in SEC cases, as well.

From what I have heard so far, the Hensarling memo did not call for dismantling the SEC whistleblower program itself.  It would be bizarre if it did, considering that on the House Financial Services Committee website is a page with a “Whistle Blower Form”, and a big picture box link captioned “Blow the Whistle”, alongside a picture of and a quote from Chairman Hensarling.

[Edit: The House Committee's “Blow the Whistle” webpage was live as of February 14, 2017, the original date of this article.  At that time, the Republican Party held a majority in the House.  After a Democratic majority was seated in the House in January 2019, a new whistleblower page captioned “Whistleblower Form” was posted on the House Committee on Financial Services’ website.  That Form can be found here (as of February 15, 2018).]

In the second part of my post-election article, I noted that, once enacted, whistleblower programs have historically enjoyed bi-partisan support.  The two Republican Senators’ recent letter extends that bi-partisan support to the present. 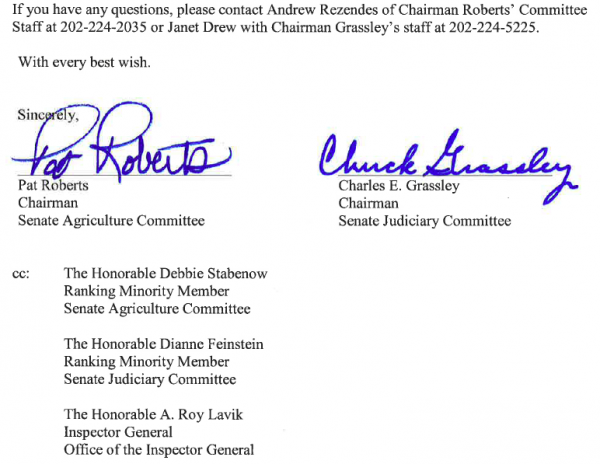 In their letter, among other things, Senators Roberts and Grassley stated:

Whistleblowers perform an invaluable public service.  Yet, they often face intimidation, retaliation, and prohibited personnel practices…. It is vital that employees … are reminded about their ability to make protected disclosures…. retaliation against whistleblowers will not be tolerated.

This is strong language by two ranking Republican Senators in support of whistleblower rights and protections, and should give potential CFTC and SEC whistleblowers a measure of confidence in light of the recent Hensarling memo.

It is also reminiscent of a letter written in 2014, signed by eight Democratic Members of Congress, in which they urged the then-SEC Chair to take greater measures to protect SEC whistleblowers.

If you would like to read the prior posts mentioned above, you can find them by clicking on the following links:

SHARE ON
TwitterFacebookLinkedInPin It
<< Can a Whistleblower Give Company Documents to the SEC?
Senators Introduce Bi-Partisan Bill To Increase SEC Penalties >>