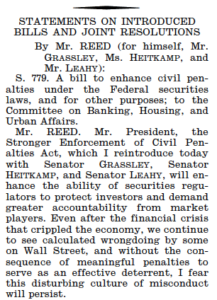 The two primary monetary remedies available to the U.S. Securities and Exchange Commission (“SEC”) are disgorgement and penalties.  Broadly speaking, “disgorgement” means having to give back ill-gotten gains.  “Penalties” are separate from and in addition to disgorgement.  Presently, the amount of the penalties that the SEC can seek is limited by statute.

Enhanced Penalties Under The Act 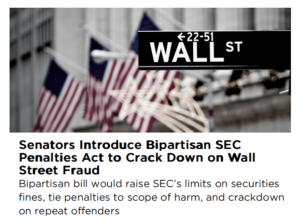 The Act would define a recidivist as a person or entity who was held criminally or civilly liable for securities fraud within the previous five years.

For recidivists, the Act would raise the maximum penalty to three times the normal cap.

In addition, the SEC would be allowed to seek civil penalties against people or entities that violate injunctions or bars previously entered or obtained against them under the securities laws.  Each violation of an injunction or order would be considered a separate offense.  If the failure to comply with an injunction or order is ongoing, each day that the person or entity fails to comply would be considered a separate offense.

The SEC Penalties Act may be the latest indication of some possible bi-partisan trends developing in Congress.

The first potential trend may be increased support for the enhancement of financial penalties for committing securities or financial fraud.

A second potential trend may be increasing bi-partisan support for the SEC, SEC whistleblowers, and their combined efforts to rein in corporate and securities frauds.

In addition to the bi-partisan SEC Penalties Act, Chairman Hensarling’s CHOICE Act, and Senator Warren’s Rigged Justice report, there seems to be developing some bi-partisan support for recognizing and protecting whistleblowers.

Last month, two Committee Chairmen in the U.S. Senate, both ranking Republicans, sent a letter to the Acting Chairman of the CFTC urging it to take stronger steps to protect whistleblowers.  Their letter was copied to the two ranking Democratic Members of their respective Committees.

That letter was reminiscent of an earlier letter to the SEC pushing for stronger protections for SEC whistleblowers.  That letter was signed by eight Democratic Members of the U.S. House of Representatives.

In addition, as I have written about previously, once enacted, federal whistleblower programs have historically enjoyed bi-partisan support.