One question that is constantly on the mind of a potential SEC whistleblower or an SEC whistleblower lawyer is whether the SEC will be interested in their case.  While there is no way to guarantee anything, some insights can be gained by looking at the kinds of cases that the SEC has brought in the past.

In prior posts, I have discussed cases that the SEC has brought for violations of:

I have also previously written about areas of heightened attention identified by the SEC’s Chief of Staff (see post here), and types of cases that the SEC listed in a press release (see post here).

A few days before the holidays, the SEC filed charges against a former official of the New York State Common Retirement Fund (NYSCRF) and two brokers.  The NYSCRF is the third largest public pension fund in the United States.

The former official was hired as the NYSCRF’s Director of Fixed Income.  In this role, he had the responsibility for investing approximately $50 billion of the Fund’s assets.  Officials in similar positions will often contract with brokers or investment firms to do the actual investing for them.

When brokers or investment firms give money or gifts to the official in order to beat out their competitors and win the public pension fund’s business, this is called “pay-to-play”.  “Pay-to-play” is another way of saying “bribery”.

In the NYSCRF case, the SEC charged the official and the two brokers with engaging in an illegal pay-to-play scheme. 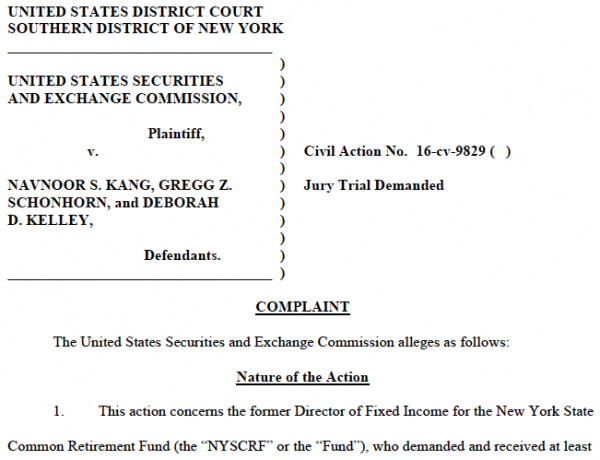 According to the SEC’s court Complaint, the two brokers gave the official the equivalent of at least $160,000 in “benefits” to win the NYSCRF’s business.  Among the “benefits” that they allegedly gave to the official, and that the official accepted, were:

In addition to the SEC’s lawsuit against the official and the two brokers, the U.S. Attorney’s Office has also filed criminal charges against them.

In a press release about the case, the Chief of the SEC Enforcement Division’s Public Finance Abuse Unit explained that “rather than compete fairly for business” from the NYSCRF, the two brokers “bribed their way in, lining their pockets with millions in commissions along the way.”

With regard to the NYSCRF official, the Director of the SEC’s Enforcement Division declared “This action demonstrates that the SEC will not tolerate public officials who abuse public pension funds to satisfy their own greedy and wanton desires.”