SEC Fines Barclays Again: $97MM Is The Second Fine In Under 2 Weeks

As a follow-up to my last article, on Wednesday the SEC announced that it has fined Barclays Capital more than $97 million for overcharging three sets of clients by almost $50 million.  The violations took place from September 2010 - December 2015.

This was the second time in less than two weeks that the SEC has fined Barclays.  Just nine days earlier, the SEC fined Barclays over $12.7 million for RMBS supervisory failures.

The recent action brings the total amount of fines that the SEC has imposed on Barclays in the last two weeks to approximately $110 million.

The Three New Sets Of Violations 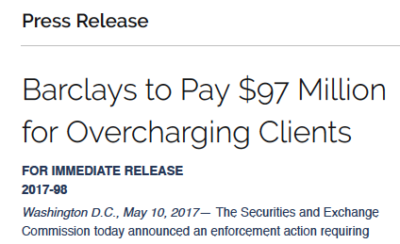 In settling with the SEC, among other things Barclays agreed to pay disgorgement of more than $49.7 million, prejudgment interest of over $13.7 million, and a civil monetary penalty of $30 million.

The Order requires Barclays to deposit more than $93.5 million into a “Distribution Fund” to be held in escrow.

In an SEC press release about the Order, the Co-Chief of the SEC Enforcement Division’s Asset Management Unit stated:  “Each set of clients who were harmed are being refunded through the settlement.”